A ray of hope as Premier says the number of solar panels could be increased.

Among the Victorians who missed out on state-subsidised solar panels on the monthly allocation within 90 minutes may get another chance of getting it.

Facing a backlash from frustrated consumers and solar panel companies, Premier Daniel Andrews said on Tuesday that the monthly allocation could be increased from around 3300 a month – if safety and quality can be guaranteed.

The Premier said it had been anticipated that the program “might grow and change”.

The rebate scheme was a major election pledge by the Andrews government, which promised to put subsidised solar panels on 650,000 homes to cut household power bills. 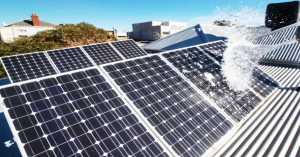 Solar panel companies are preparing to rally in the city again this week to protest against the scheme they say has slowed down installations and hurt their businesses.

Victorians who had been planning to install solar panels are now unwilling to do so unless the state government helps foot the bill.

The rebate scheme was paused in April this year but then resumed with a cap of about 3300 eligible homeowners each month.

Solar installers rallied on the steps of the Victorian Parliament last month with many claiming they have had to let staff go as installations slowed down dramatically.

It has also called for the number of rebates to be doubled.

The council’s chief executive John Grimes said changes to the rebate system needed to be made immediately because it had already caused “devastation across the industry”.

“Our sense is that changes need to happen within days, not weeks or months. We just don’t know how much longer solar businesses can hold out.”

Opposition energy spokesman Ryan Smith said Mr Andrews needed to “back up his words with action” to get the industry back on its feet. He said the government should have consulted more closely with solar business operators to prevent the problems it has now encountered.

“These issues should have been foreseen,” he said.