A new electric vehicle charging technology is tested by CSIRO researchers  that will be able to minimises demand from the grid, and maximises the use of rooftop solar generation as they seek to head off the not-too-distant future challenge presented by mass EV charging at times of peak demand.

In a state government funded collaboration with Nissan Australia and Delta Electronics, three battery and solar backed EV charging modules that is capable of charging  four electric vehicles will be put to the test by the researchers.

the cabinets are developed by Delta Electronics  that combine a  battery storage with a Solar system and EV charging, while the CSIRO has focused on a module capable of integrating with battery and solar systems.

Installed at Nissan headquarters The charging systems in Dandenong, will be trialed over a period of 200 days, which will include the peak summer period, to evaluate off-grid EV charging with battery back-up and solar power . The cars used with Nissan Leaf EVs.

A range of heat management strategies are incorporated by this technology to ensure EV batteries are charged and discharged efficiently, even the hottest summer season of Australia when generally the demand for grid supplied electricity is often at its peak. 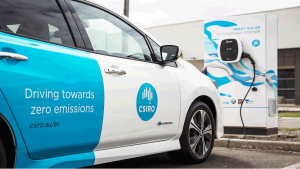 It also supports the limited access to grid power charging of multiple vehicles in areas, where the charge rate  is limited otherwise. That also include the home “garage,” where the CSIRO expects EV charging of about 90 per cent.

The main goal of the technology is to recharge the devices of EVs as quickly as possible, using the highest amount of solar energy as possible, without the need of upgrading the grid connection.

“Generally a normal household battery system is not powerful enough to charge a car on a hot day as it can slow down and overheat,” said Dr Christopher Munnings CSIRO lead researcher to the Centre for Hybrid Energy Systems,.

“He further added that we’ve devised a way to manage the temperature of the battery, that will minimise the amount of power required from the grid”

The widespread rollout of EVs across the country could be accelerated by this technology.”

Nissan Australia managing director Stephen Lester said the mass-market EV pioneer and car-maker, via its hugely popular Leaf was proud to take part in the trial.

“A study of this technology and enhancement will enable greater EV adoption not just here but around the world reducing impact on the grid,” he said.

Lily D’Ambrosio the Victorian energy and climate minister, welcomed the project as an important step towards transport emissions reduction.

“She further said that we all know we need to reduce emissions in the transport sector and for this purpose one of the best ways is to support partnerships like this one.

Following the test period, project partners will evaluate data collected throughout the trial, with the intention of confirming associated environmental and cost benefits.