La Trobe University has set a goal of Net Zero emissions by 2029 with a 75 million dollars initiative.

Even Though this university will not be Australia’s first clean energy university,but its project probably will be the most ambitious and interesting. 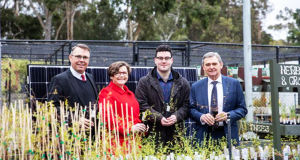 To the casual observer a decade may seem a casual pace to achieve such a goal, especially considering The University of New South Wales (UNSW) will be receiving 100% of its electricity from the 255 MW Sunraysia Solar Farm from 2020 onwards.

However, the casual observer forgets that La Trobe University is Victoria’s only state-wide university. Net zero emissions for La Trobe University does not equate to a renewable transition for a single Melbourne campus, but also for campuses at Mildura, Bendigo, Shepparton, Albury-Wodonga and many more landholdings throughout the state and across variable climate zones.

“La Trobe recognises the social, environmental and economic importance of reducing our carbon footprint,” said Dewar, “That’s why we have set an ambitious target to become the first University in Victoria to meet this important goal.”

On the Melbourne campus alone more than 7,000 solar panels are to be installed upon 27 smart-buildings. At peak efficiency these panels should supply up to half the campus’ daytime power usage. These panels are in addition to the 3,300 modules that have already been installed on some of La Trobe University’s regional campuses.

“Not only is reducing our carbon emissions the right thing to do,” continued Dewar, “it also makes good economic and environmental sense. Rather than simply buy carbon credits, we’ve got a clear plan for action and we are making genuine, local changes to become more efficient and make a deliberate switch to renewables.”

Considering its significant landholdings, the university is also investigating with industry and government as to whether it can viably install solar farms on its own land. Vice President Strategy and Development Natalie MacDonald said this initiative was the obvious next step in the university’s long-term sustainability plan.

Not only would such an installation provide clean energy for the university, but it would also allow for on-campus solar PV research. La Trobe is already taking advantage of in-house research and technology expertise to reduce emissions through its La Trobe Energy Analytics Platform (LEAP), which monitors and makes adjustments for the energy consumption of up to 50 smart buildings on campus.