An electric car charged from the Australian grid will result in around twice the emissions per kilometre driven.

Some find this surprising, while others already know Australia’s coal-heavy grid results in grid-charged EVs charged cooking the planet more than hybrids. Possibly because But we can’t automatically conclude hybrids are environmentally better than fully electric vehicles. It depends on the situation and there are several factors to consider:

Most new car buyers base their purchase at least partially on performance and electric cars can have far better acceleration than the typical hybrid.
The Australian grid is getting greener and coal generation has dropped from a peak of around 86% of generation to around 66% today.
It requires less than one additional kilowatt of rooftop solar to offset an electric car’s emissions, so they’ll be less than those of a fuel efficient hybrid if they are driven the average distance for Australian passenger cars.
Because many people will buy electric vehicles for their performance, a fuel efficient hybrid often won’t be an appropriate comparison, as the majority of EVs can seriously out-accelerate them.

Also, because buying an electric car often prompts people to install rooftop solar power or increase their current solar panel capacity, this can result in lower overall emissions than purchasing a non-plug-in hybrid.

While I don’t have any statistics on how much extra rooftop solar people are likely to install as a result of getting an EV, I know my boss Finn is looking at installing another 12 kilowatts of solar panels now he has a Tesla S to hoon around in.

Car Emissions of Petrol Passenger:
According to the Australian Bureau of Statistics, the average Australian petrol powered passenger vehicle only gets 9.4 kilometers to the litre. This is awful, although a few places, such as Canada where people are in the habit of driving continental siege machines around, still have us beat. It would be nice if we were improving in this area, but the nation’s vehicle fuel efficiency has been getting worse.

Only 9.4 kilometers to the litre comes to 106 ml of petrol per kilometre. Burning this results in 244 grams of CO2 per farting out of the exhaust. In addition to this there are emissions from refining,extracting and transporting petroleum products. One estimate is they equal 13% of the exhaust emissions, which makes the average emissions for Australian petrol passenger cars 275 grams per kilometer.

Hybrid Emissions
Finding out the tailpipe CO2 emissions of hybrid cars is easy enough thanks to the Australian Government’s Green Vehicle Guide site.

Of these 6 hybrid vehicles 5 are Toyotas. This is not surprising as Toyota developed modern hybrid cars and any hybrid you see probably uses their technology to some extent. They were expecting the 2020s to be the decade of the hybrid car and my understanding is they were royally pissed off that full electrics stole the crown for “potentially most environmentally friendly vehicle”. But Toyota has come around and will be selling a full electric car in their test market of China this year.

The emission figures in the graph above only show what comes out of the exhaust. After they’re Increased by 13% to allow for emissions that result from getting petrol to the vehicle, the lowest emission hybrid results in around 90 grams of CO2 per kilometer. 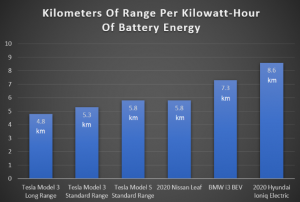 While it’s possible for non-plug-in hybrids to become more fuel efficient in the future, there’s not much scope for this without reducing their performance and most research and development is now going into electric vehicles.

EV Emissions
The exhaust emissions of full electric vehicles are easy to work out. They don’t have exhausts, so it’s zero. But EVs do cause CO2 emissions when charged from the grid, as most of that energy comes from fossil fuels. The good news is grid emissions are falling as renewable generating capacity expands. This includes rooftop solar, so thanks to everyone who has installed it.

This report says the average emissions per kilowatt-hour for grid supplied electricity in the National Electricity Market — which doesn’t include NT or WA— is 720 grams per kilowatt-hour. But just like oil there are also emissions from extracting and transporting fossil fuels and this adds roughly 11% to the total, increasing it to 800 grams.