Tree loss is making for sweaty suburbs, and the households that can least afford it are feeling the heat

Money might not grow on trees, but it’ll probably buy you a place with more of them.

And more trees in your street can make a big difference, not only keeping things less hot and sticky at home, but also saving you money.

The problem is that in many suburbs trees are disappearing — and the resulting “thermal inequity” affects the people who can least afford it.

Urban and environmental planner Tony Matthews says between 2008 and 2017, Australia’s major metropolitan areas cumulatively lost 2.6 per cent of their vegetation — which adds up to an area larger than Brisbane.

A birds-eye view of streets in a new-looking development. The rows of houses look similar and sit very close to each other.
“Cities become artificially hotter and that can be variable across the city and much more severely felt in some parts than others,” Dr Matthews, who lectures at Griffith University, tells ABC RN’s Life Matters.

He says the people really feeling the heat are those on the urban fringe, which is often they only place they can afford to live.

Many of those people don’t have the option of simply turning up the air conditioning.

“Many of these people are renters, so they can really not afford this. And more than that, they can’t actually do anything about their situation,” Dr Matthews says.

“They’re not in a situation where they could, for example, put solar panels on the roof to offset the cost of air conditioning.”

Dr Matthews says greenery has a strong correlation with property prices too — living close to a park can inflate value by 5 to 20 per cent.

Western Sydney University’s Abby Mellick Lopes has studied how communities in that area are affected by heat.

Dr Mellick Lopes says for some people, “the only response they could have to an extremely hot day is to remain as still as possible”.

“which is obviously not good for health and well-being outcomes or for their capacity to connect with other people,” she says. 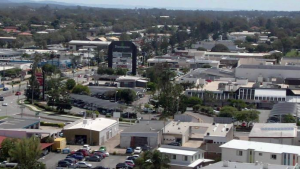 “You’ve got a large number of people in rental properties which usually have less insulation, and also people are less inclined to feel that they can actually intervene and change those properties to add shade by actually growing trees,” she says.

“So people in those situations tend to be a little trapped because they don’t have those cool spaces where they can actually get from A to B comfortably.

“Often bus stops are not covered as well.”

Landscape architect Libby Gallagher says trees, especially those that can provide direct shade to buildings, can act as “natural air conditioning units for many neighborhoods”.

It can make a huge difference.

“Some of the research indicates up to three degrees, in some circumstances that can be as high as six to seven degrees centigrade,” she says.

“That actually has a big effect on health, as well as obviously electricity bills and consumption.”

Who can fix it?
The experts say the responsibility isn’t just on councils and government.

Dr Matthews says in cities, the majority of space is owned by the public.

“Council certainly can affect change on the streets, for example, or in public parks. But when it comes to the individual property owner and the individual building, that then becomes a private property issue,” he says.

“So it’s trying to appeal to private landowners and building owners to use these technologies, to use green infrastructure, to do more vegetation planting and more tree planting. That’s the real problem.”

Dr Gallagher works with local councils in Melbourne and Sydney, talking with residents about the options for trees in their street and getting them on board before anything’s planted.

She says often people initially have concerns about leaves and mess.

“What we find is that when we introduce the wider benefits of trees, when we share with them the research the economic benefits, the impact on their electricity bills, we find that people really transform their perceptions,” she says.

She says tree choice is important too.

“You need to actually think about the right tree, the capacity of that tree to tolerate certain circumstances, even the orientation of the street and the way that the tree shades the street,” she says.

“It’s also designing our streets, our verges properly, so allowing for adequate soil volume and thinking about innovative ways to develop our streetscapes like pavements to prevent cracking.”

Dr Mellick Lopes says given trees take a long time to grow, there are things that can be done in the meantime to help people keep cool:

Providing shuttle buses to allow people access to cool public spaces like pools or libraries
Extending opening hours on these spaces so people can make the most of them in the cooler hours of the evening
Looking out for elderly neighbours on days of extreme heat
Making the most of DIY solutions to keep homes cooler in the heat
Dr Gallagher says she’s optimistic things can change.

“I can see across all sectors of local government and state government that I’ve been a party to, everybody’s talking about urban heat and the importance of urban tree canopy,” she says.

“I’m really seeing a shift, a significant shift, in perception. And that’s really been driven also by community desire.